With carnival season almost upon us, check out our pick of the best celebratory food from around the world.

In most cases, carnival marks the period before the beginning of Lent in the Christian calendar. The word “Carnevale” dates back to the 1400s and means “to say farewell to meat”, which is why, during carnival season, you’ll often see meat-free recipes, as well as an abundance of sweet treats that use up leftover store cupboard items before Lent.

Wherever you may find the carnival spirit, you can be sure to see colourful street parties, lavish costumes and elaborate masks, mixed with music, culture and plenty of tasty food. Here’s my pick of the food you can expect to come across if you’re travelling, plus recipe suggestions if you’re staying at home and fancy throwing a carnival-themed party!

Brazil famously hosts the world’s biggest carnival party. Top foods include traditional Brazilian recipes such as feijoada (slow-cooked pork and beans with rice), moqueca baiana (a fragrant fish stew) or carurú (a dish similar to gumbo made with shrimp and toasted nuts). There’s also plenty of street food and sweet treats on offer, such as brigadeiros (chocolate truffles made with condensed milk and cocoa) and quindim – a dessert made of egg yolks, sugar and ground coconut. 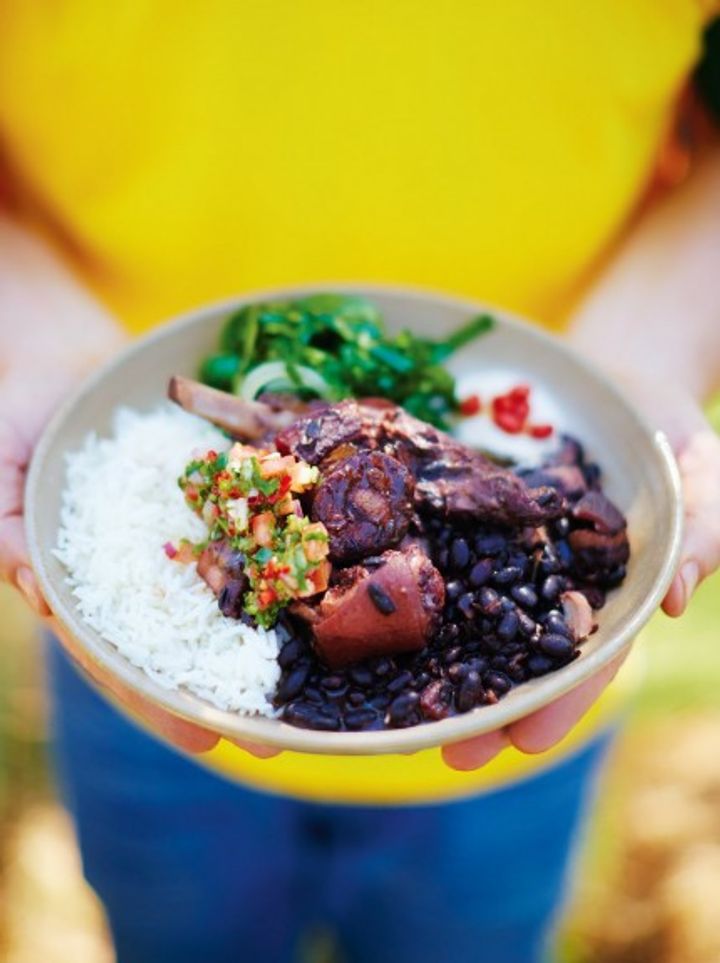 To bring a touch of the Brazilian carnival to your home, mix up the country’s most famous cocktail, the caipirinha, or for a healthy twist, try Jamie’s colourful mint caipirinha fruit salad. You could also make a version of brigadeiros by making these truffles and swapping the double cream for condensed milk.

The Italians celebrate carnival with a whole array of pasta dishes and fried pastries, such as frittelle or crostoli (fritters filled with cream). In Venice in particular, there are plenty of seafood dishes to be tried, inspired by the abundance of local fresh fish. To drink, you might come across a Venetian spritz cocktail or a peach Bellini. Try this gorgeous arancini for an Italian street food-inspired dish to serve to your friends at home.

In France, carnival is called Le Carnaval or Mardi Gras – meaning “Fat Tuesday”, with the most famous street carnival taking place in Nice during the two weeks before Lent. You’ll find plenty of fresh crêpes, alongside waffles and beignets, which are similar to doughnuts. If you’re planning a French-inspired Mardi Gras celebration, add these hot and crispy mini vegan doughnuts to your menu. 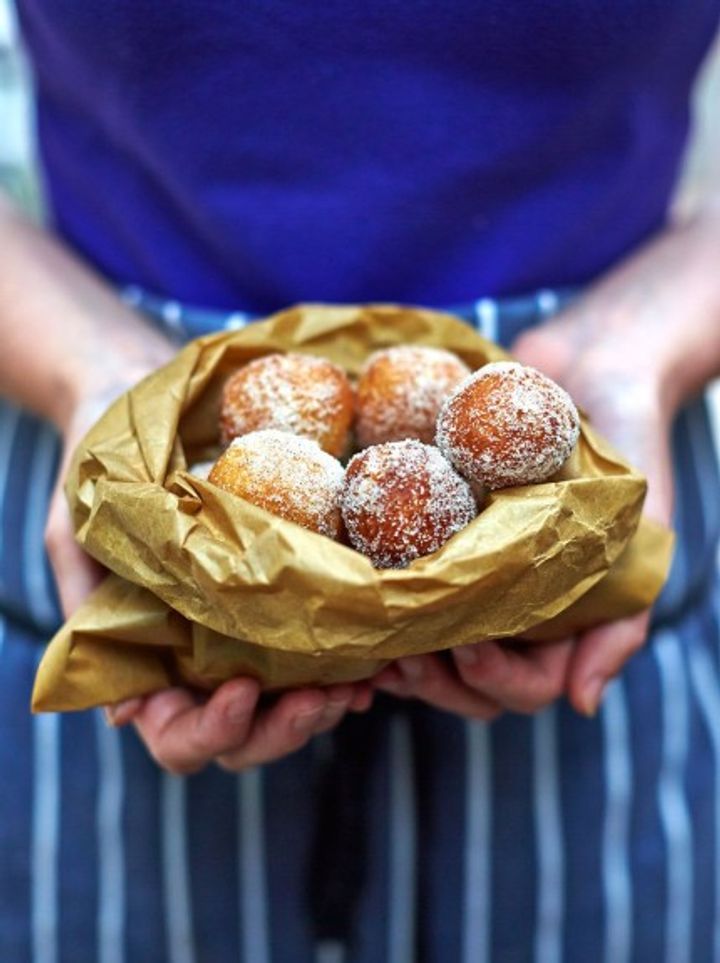 Hot, crisp and sweet, these doughnuts are a fantastic naughty snack that everyone will love

Carnival is celebrated in seven regions across Germany and showcases traditional food such as bratwurst or German sausages, krapfen (similar to doughnuts), fresh pretzels and mulled wine. As a nod to the German carnival season, why not try this kartoffelsuppe – a traditional bowl of potato soup topped with German sausage.

Eastern European countries such as Poland, Lithuania, Russia, Slovakia and Slovenia all join the carnival celebrations. In Poland, on Tłusty Czwartek, meaning “Fat Thursday”, one tradition involves indulging in doughnuts, chrusty or faworki (strips of pastry fried in dusted in icing sugar). Gluten-free buckwheat is also hugely popular in Eastern Europe – give it a go with these delicious buckwheat crepes with poached apple and pear. 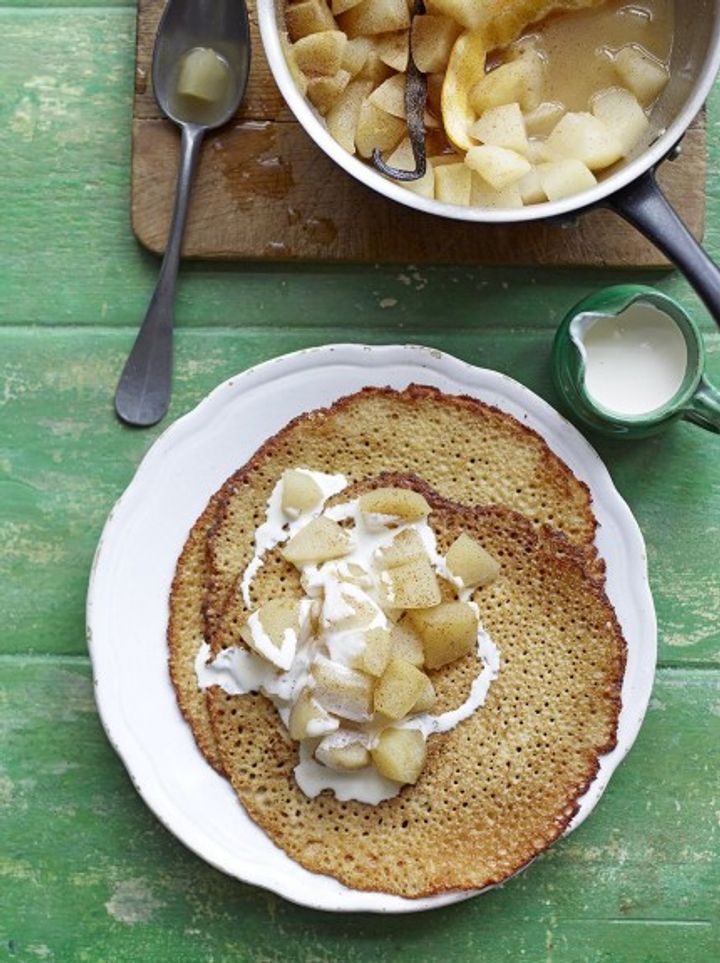 Simple, comforting and delicious – everything you need in one dish

Carnival in Cyprus is mainly celebrated around the streets of Limassol and sees the first week dedicated to meat (think chicken kebabs like souvlaki) and the second week to cheese. For a tasty (meat-free) Cypriot party piece, serve up this Cypriot-inspired potato salad, packed with plenty of new potatoes, black olives and fresh herbs.

In India, carnival has been celebrated in the state of Goa since the 18th century, and is one of their most famous celebrations. For a homemade Goan-inspired party dish, try Jamie’s fantastic fish tikka curry with fluffy white rice. 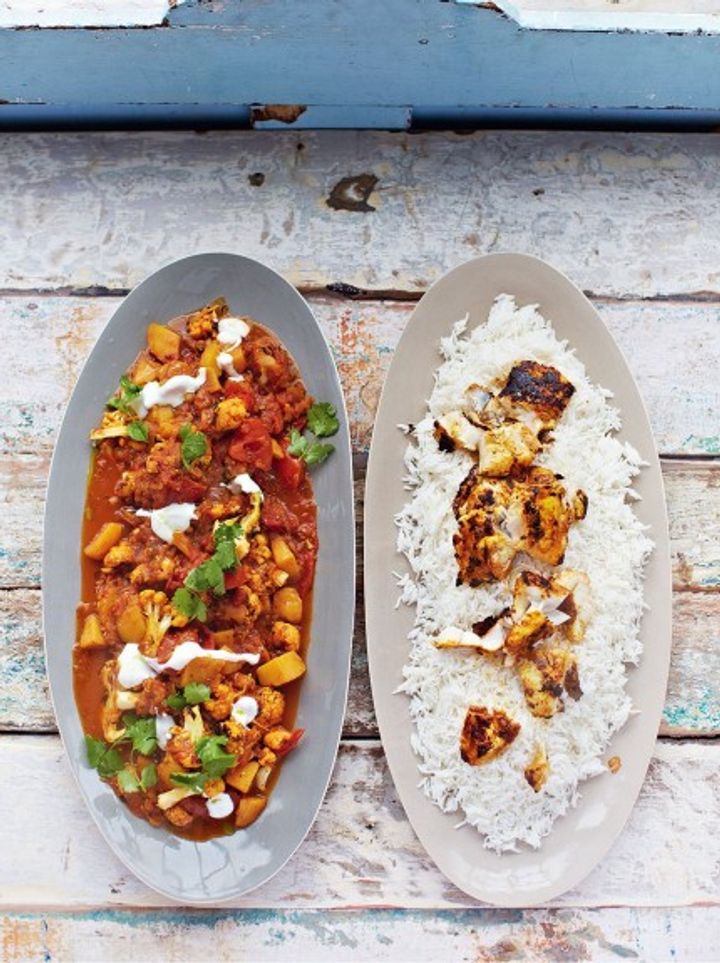 Carnival across the Caribbean in general is very well marked, with the biggest celebrations happening in Trinidad and Tobago. Expect huge parades and lots of colourful costumes alongside food such as curried chicken, fried bread sandwiches or corn soup. To make your own Caribbean-inspired food, try Jamie’s rice and peas with jerk roasted veg.

If you’re over on the sun-kissed island of Jamaica, you’ll come across carnival-style celebrations called “Bacchanal”. The Jamaicans put their own spin on the festivities, which include colourful costumes and parades through the streets of Kingston, as well as lots of loud music and dancing.

No feature on global carnival food would be complete without mention of Mardi Gras in America. The most notable celebrations take place in New Orleans, where you’ll see a mix of both French and Brazilian influences. As well as huge street parades and colourful floats, celebration food includes corn dogs, corn on the cob, jambalaya, gumbo and sweet treats such as beignets, doughnuts and king cakes.

For an American-inspired carnival feast at home, try Jamie’s Cajun rice and barbecue turkey burrito recipe or this Southern-style pork and slaw, which will be sure to impress your party guests.

I hope that this round-up of celebratory carnival food from around the world inspires you to embrace the festivities and sample some of the amazing food on offer, whether at home or abroad.