Words and photos by Ren Behan

Long may this fabulous weather continue! It’s a real treat to be able to organise a barbecue with confidence and for the children to forget the existence of raincoats

It may be a cliché, but hot weather calls for foods that cool. At the top of my food list for this period are watermelon, cucumbers, frozen ice lollies and plenty of chilled summer berries. The saying “cool as a cucumber” dates as far back as a 16th century poem and is borne from science – the inside of a cucumber can be up to twenty degrees cooler than its outside temperature – they really can cool you down!

Surprisingly, two of my favourite summer salads don’t feature any salad leaves at all, but instead make the most of hydrating watermelon and cooling cucumber. The first is a Middle Eastern-inspired salad of watermelon, cherry tomatoes, feta, almonds and za’atar, courtesy of Chef Silvena Rowe. Who knew that watermelon and cold feta cheese would go so well together? To go with this, you could also try Jamie’s Sangria Latina, made with watermelon cubes and rum – adults only!

The second summer side-salad I love is a dish typically served during the summer in Poland called ‘Mizeria’, and is made with cucumbers, salt, sour cream and fresh dill. 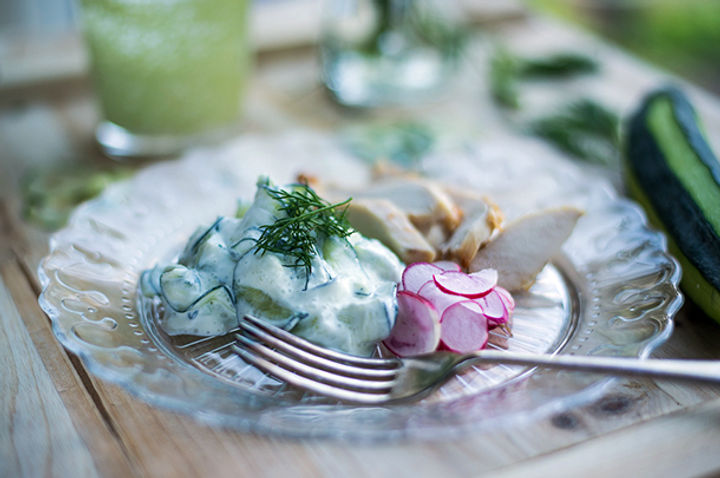 These two salads are always the first to feature on my summer menu. They require little preparation and I’m always left with empty serving dishes afterwards!

I’ve always been somewhat intrigued by the name given to the Polish cucumber salad, since ‘Mizeria’ literally translates as “Misery”! There are, in fact, two stories behind the name. The first is that this was a dish enjoyed by peasants, who were often thought of as being miserable owing to their poor status. The second is that this salad was a dish often made for the Italian princess Bona Sforza, who married Polish King Sigismund I. It was said that every time Queen Sforza ate the salad, she cried as she was homesick for her homeland. Either way, please don’t let the slightly bizarre name given to this salad put you off making it! As well as being cooling and refreshing, it’s a very handy recipe to have up your sleeve if you’re faced with a glut of cucumbers, or you are looking for a salad to take along to a barbecue.

You can make this salad with any cucumbers – the two main varieties are slicing cucumbers and pickling cucumbers. ‘Picklers’ are shorter and sometimes sold as ‘Kirby’ or ‘liberty’ cucumbers. I used fresh Sicilian cucumbers I found at the market, although the English cucumbers I usually use work very well, too. You can remove the seeds if you want to (by chopping the cucumber lengthways and using a teaspoon to scoop them out), or simply finely slice the cucumber whole. You can also choose whether to peel the cucumber or leave the skin on; traditionally it is peeled for this salad, but you may want to simply wash it and retain the nutrients in the skin before slicing. 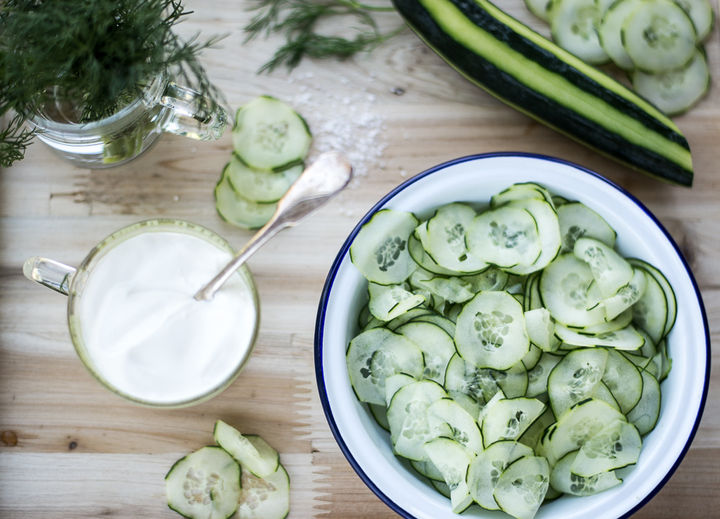 Start by finely slicing the cucumbers, either by hand with a good knife, or carefully using a mandolin or a food processor with a slicing disc. Put the sliced cucumber into a colander, sprinkle with salt and leave the colander over a bowl. The salt will bring some of the liquid out of the cucumber, which will also turn slightly darker in colour.

Drain well (using your hands to squeeze the cucumbers to release any excess juice) and transfer the cucumber to a fresh bowl. Stir through the sour cream (adding a little more of you prefer a creamier salad) and the fresh dill.

Chill the salad if you can for twenty minutes or so before serving.