BUY THE BOOK
Tap For Method

BUY THE BOOK
Tap For Ingredients

TO START
Get all your ingredients and equipment ready. Put a medium ovenproof frying pan (approx. 26cm) on a high heat and a small frying pan on a low heat. Turn the grill on to full whack. Put the standard blade attachment into the food processor.

TORTILLA
Chop the potatoes into 1cm chunks. Put them into the medium ovenproof frying pan with a lug of olive oil and toss. Halve, peel and roughly chop the red onion. Once the potatoes have a good colour, add the onions to the pan along with the fennel seeds and mix well. Now get on with other jobs but remember to keep tossing the potatoes occasionally.

CHORIZO
Slice the chorizo into 2cm rounds. Put into the small frying pan with a splash of olive oil and toss occasionally until golden and crisp.

PEPPERS
Trim off the rind from the Manchego, then crumble into the food processor with a handful of torn up ciabatta, 50g of blanched almonds, the leaves from the bunch of thyme, a good pinch of salt & pepper and a swig of red wine vinegar. Whiz up until fine, then stuff inside the peppers – no need to pack it in. Once full, put them into a baking dish. Scatter any remaining breadcrumbs over the peppers. Top with the remaining thyme sprigs, drizzle with olive oil, then put on the middle shelf, under the grill, for 8 minutes. Rip the remaining ciabatta in half and take to the table.

MANCHEGO
Lay the slices of cured meat on a board alongside the large wedge of Manchego. Drizzle a little honey over the cheese, then sprinkle over a pinch of ground coffee. Scatter a handful of black olives and a few leaves of thyme or oregano (if using) over the meat. Drizzle with a tiny bit of extra virgin olive oil, sprinkle lightly with pepper and take to the table.

CHORIZO
Lightly bash 2 unpeeled cloves of garlic with the heel of your hand or the bottom of a saucepan and add to the pan.

TORTILLA
The potatoes should be lovely and golden by now, so turn the heat down to low. Crush 2 unpeeled cloves of garlic into the pan. Pick most of the rosemary leaves into the pan and stir. Season with a good pinch of salt and pepper.

CHORIZO
Carefully drain away most of the fat, leaving about 1 tablespoon of it behind. Add the red wine vinegar and runny honey and leave to reduce down to a really sticky glaze. Keep an eye on it, giving the pan a shake every so often so it doesn’t catch.

TORTILLA
Taste the potato mixture for seasoning, then crack the eggs directly into the pan and gently stir with a wooden spoon to create a marbled effect. Turn the heat up to medium. Once the eggs start to set around the sides, scatter the rest of the rosemary leaves on top and put under the grill on the top shelf for 3 to 5 minutes, or until set, golden and fluffy.

ANCHOVIES
Put the anchovies into a nice serving bowl. Finely chop a few sprigs of parsley and sprinkle over. Finely grate over the zest of ½ the lemon, then drizzle over some extra virgin olive oil. Halve the cherry tomatoes and pile them next to the anchovies with a bunch of cocktail sticks.
The idea is to get everyone to make their own skewers. Add a pinch of paprika and take to the table.

TO SERVE
Take the tortilla and stuffed peppers to the table. Pop a large handful of rocket next to the tortilla. Take the pan of sticky chorizo to the table. Serve with a jug of iced sparkling water filled with orange slices, and a chilled bottle of dry sherry.
Please enable targetting cookies to show this banner
Related features 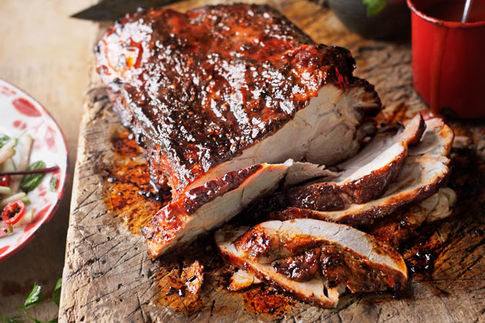 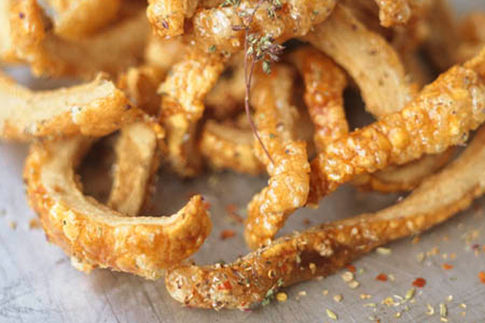 How to make crunchy pork scratchings 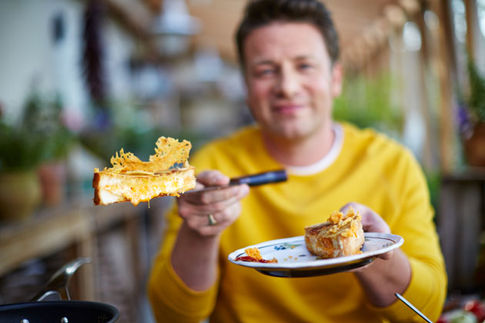 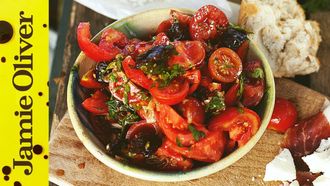