Here’s a baffling statistic – between 1991 and 2001, the number of Iranians in London increased by 750%. Most of them came to west London, which explains how I was introduced to Persian food in several incredible restaurants on the very busy, very built-up Edgware Road.

If you don’t have an Iranian restaurant nearby, try a savoury recipe at home – I quite like this one from Jamie, for a lamb wrap with pistachios and herbs. I’ve been fascinated by Iran and the Persian culture since working with two London-based Persian boys Piers and Nick, who were incredibly proud and patriotic about their Iranian roots, as they were both the first in their families to be born in the UK.

Despite some of my Iranian friends saying they “don’t really do cakes”, I’ve tried some beautiful sweet treats from that part of the world, including Pashmak, a kind of soft spun sugar candyfloss with a nutty bite, and nutty treats a little like baklava. I wanted to try a cake recipe that celebrated Iranian ingredients, and took my inspiration from Sabrina Ghayour, a London-based Iranian chef and supperclub host who has just published her first cookbook, Persiana.

Nuts are used throughout Persian cuisine because the agricultural climate in Iran suits their production so well; in fact, Iran the world’s largest producer of pistachio nuts, and the only thing they export more of is oil.

The pistachio nut (technically a seed, and a member of the cashew family) has an interesting history, because the tree that produces it is one of the oldest known plants – some reports indicate that pistachios were being eaten by humans as early as 7000BC. There are several historical accounts of Middle Eastern royalty enjoying pistachios – according to one, the Queen of Sheba designated them an exclusive food of the Royal Household, forbidding their cultivation by peasants or commoners. Meanwhile, the King of Babylon was supposed to have planted pistachio trees in his Hanging Gardens.

So here’s my recipe for a carrot cake made with the king of all nuts. 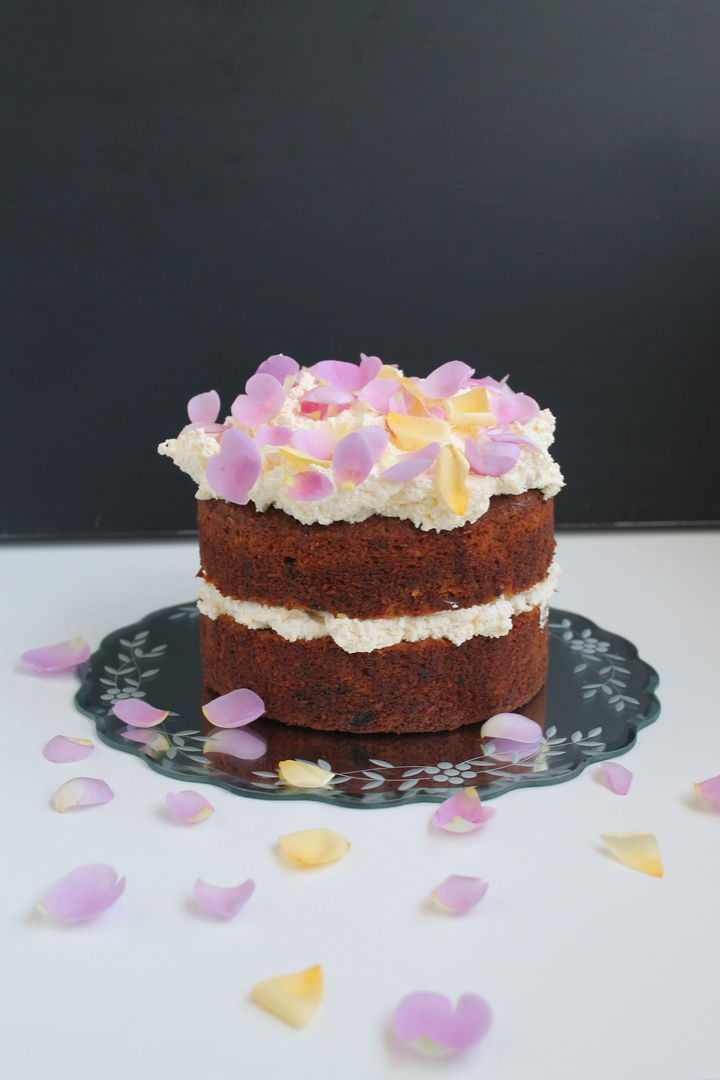 Start by soaking your raisins sultanas in a mug of boiling hot water – I find this gives a really plump juicy raisin which works well in this cake.

Next, line a 6inch/15cm cake tin with parchment paper. In a large mixing bowl, mix the eggs, butter, sugar, vanilla and honey together until well combined.

Add in the flour, nuts and spice and stir through before adding the melted butter. Once mixed, add in the carrots, nuts and drained raisins and mix until everything is combined.

Bake at 160ºC/325ºF/gas 3 for around 45 minutes until the tip of a knife comes out clean – there may be a few little crumbs attached, but this is fine, it’s a super-moist cake. Remove to a rack and wait for it to cool.

Meanwhile, whisk the double cream in a large bowl until light and fluffy. At the end, add your teaspoon of rosewater or orange flower water, and taste – add a little more if you really like the fragrant taste.

Once the cake is cool, slice it in half and fill the middle with the cream. Top it using big dollops of cream – sprinkle some rose petals or chopped pistachios onto the top for colour and texture, and serve!