Apart from perhaps kicking a ball, I’m not sure there is a concept more ingrained in humans than the sandwich. There isn’t a culture in the world that doesn’t have its take on it, nor is there a meal that can’t be improved by an improvised version. Give a man some chips and he’ll eat for day, give a man some chips and bread and he’ll make a chip buttie and smile smugly throughout.

From the sterling steak sandwiches in England, to Indian dosas, via Italy’s calzones, we love giving carbs a good stuffing. It’s programmed into us on an instinctive level. So it’s of no surprise that Honduras’s national dish, the baleada, is a wrap.

Its origins as a meal are easy to work out. Honduras takes influences from all over – indigenous Lenca people, their Spanish conquerors, the Caribbean and, the baleada’s most likely source, its near-neighbour, Mexico. It has all the hallmarks of a great Central American meal – it’s finger food with loads of chillies, limes and smashed up things to stuff, scoop and savour. It starts with a pretty standard flour tortilla, but it’s all about what you fill it with.

A simple beleada is made with refried beans, sour cream and cheese. If you fancy adding some scrambled eggs, that’s a “special” baleada. If you want anything else, you’ll be ordering what Hondurans call a “super-special” baleada, which basically means “I’ll have everything please” – usually something naughty and meaty on top of the usual additions. But the fun doesn’t have to stop there.

While the filling is taken seriously, this isn’t one of those dishes that gets traditionalists’ knickers in a twist. There is no “authentic” recipe, simply what’s common and what’s a little a bit leftfield – and might raise some eyebrows in queue behind you. In his trademark fashion, Jamie has taken the idea of a super-special baleadas recipe and gone a step further – the ultimate special baleada, if you will. On top of the beans, sour cream and cheese, he suggests chorizo (a wink to their Spanish history), avocado, lime and chillies (a nod to Mexico),  and hot sauce (a tip of the cap to the Caribbean).

If you lay all those ingredients out on the table, throw in a couple of good beers, you have not only the best damned Baleadas in the world, but also the ultimate way to watch Honduras fail to get out of the group stages.

“This Central American street food is ideal to enjoy with pre-match drinks. Just top the tortillas with your favourites – refried beans, fried eggs, crisp chorizo, cheese, avocado… whatever you like!” 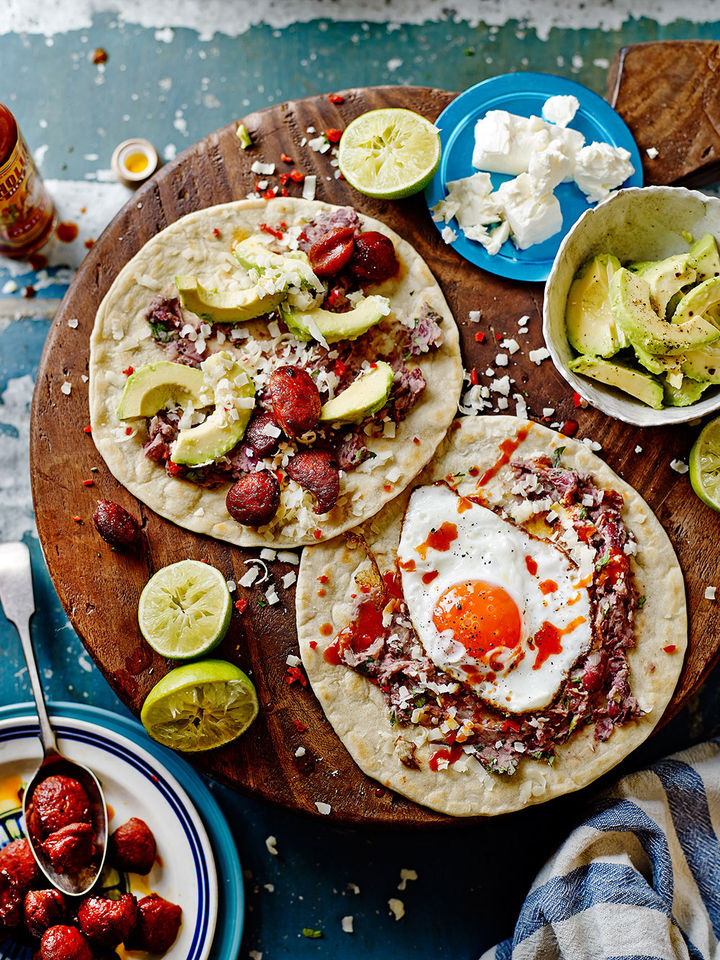 Sift the flour, baking powder and 2 teaspoons of salt together in a bowl and make a well in the centre. Pour in the groundnut oil and about 200ml of warm water, or as much as you need to form a dough, mixing with a knife until it comes together. Then, tip the dough onto a floured work surface and knead for 4–5 minutes, until smooth and elastic. Return it to the bowl, cover with a tea towel and leave to prove for 1 hour.

Place a large non-stick frying pan over a low–medium heat and pour in a glug of the oil. Add the garlic, onions and cumin and sauté for about 10 minutes, until soft and sticky. Turn up the heat to medium, stir in the kidney beans, sour cream and vinegar, season well and simmer for about 5 minutes, until the beans have softened. Mash your refried beans for a coarse texture, or blitz them in a blender if you prefer them smooth. Return the beans to the pan and leave to one side for reheating later.

When your dough has risen, divide it into 12 even pieces and roll them into balls. Flatten out each one with your hand, then, on a floured surface, roll them out into a tortilla 2mm thick and about 18cm in diameter. Place a large non-stick frying pan over a medium heat and, once hot, dry-fry each tortilla for 1 minute on each side, until just coloured – you want them still soft enough to roll. Cover with kitchen foil to keep them warm while you fry the rest.

When ready to serve, lay out your chosen toppings. Place the pan of bean mixture over a low–medium heat for 1–2 minutes, until warmed through, then spread a couple of spoonfuls over each tortilla. Scatter over the chilli and coriander, add your toppings and serve with lime wedges on the side, for squeezing over.

This recipe comes courtesy of Jamie Magazine, our gorgeous monthly mag full of recipes and travel writing from Jamie and the best chefs and writers in the world. For 50% off a year’s subscription, click here.