Sour and tart, yet sweet and smooth at the same time, rhubarb is a real treat for the tastebuds. Bang in season, now’s the time to embrace rhubarb in all its glory by bringing it to the table in a delicious crumble – April Carter from Rhubarb & Rose shows you how.

The classic crumble has always been a favourite of mine, but since I grew up with a cooking apple tree in the garden, my childhood rarely featured rhubarb crumble. Since then, rhubarb has been a seasonal fascination to me, especially the intensely sour and vibrantly pink forced variety from Yorkshire. I even named my blog after it.

From poaching to pickling, there are plenty of ways to celebrate the British rhubarb season, but this classic and simple pudding is one of the easiest and most satisfying. The sharpness of the rhubarb is tempered with golden caster sugar and flecks of vanilla, and the crumble brings texture and the taste of shortbread and pastry without the effort of making it. As with pastry and shortbread though, it’s important not to overwork the flour and butter so that your crumble is crispy rather than greasy.

A greasy topping isn’t the only thing that can make for a bad crumble. Too sweet, too sour, too high a ratio of fruit to crumble, as well as a soggy topping can all make for a disappointing end to your Sunday roast – so I’ve developed a few tips and a recipe to ensure rhubarb crumble success.

RULES FOR THE PERFECT RHUBARB CRUMBLE

Rhubarb tends to shrink down when cooked, so don’t be afraid to pile it high in your baking dish. For the perfect crunchy texture, keep your butter nice and cold and keep the crumble loose when covering the filling rather than pressing it down onto the rhubarb. You can make the crumble in advance and keep it in the fridge or freezer, if you like. Serve with vanilla custard or even cold with Greek yoghurt the next day.

HOW TO MAKE RHUBARB CRUMBLE

For more great ways to embrace this versatile veggie, check out our pick of the best rhubarb recipes or, if you have other fruits you want use, watch Jamie making a fruit crumble here: 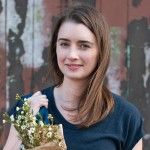 April Carter is a baker, food stylist and author of Decorated, trEATs and Top of the Cake Pops published by Hardie Grant. She loves making delicious and beautifully decorated cakes and combines her love of all things sweet with documenting what she bakes on her blog Rhubarb & Rose. Before working in food full time, April ran online and broadcast projects for the BBC. She has since trained at Leiths School of Food & Wine, worked alongside pastry chefs and bakers at Violet Cakes, Sketch and Polpetto, appeared on Channel 4's Daily Brunch and held sell out skills classes at the Cake & Bake Show.