Living in London means I’m spoilt for restaurants with views. You can eat at the top of the Shard, or watch street acts from the balcony in Covent Garden Market, or look out over St Paul’s Cathedral from Jamie’s own barbecue steakhouse, Barbecoa.

But I have never seen a restaurant view like Fifteen Cornwall’s. The floor-to-ceiling windows jut out from a sheer cliff, straight down to the sands of Watergate bay and out into the Atlantic. Only the curvature of the earth stops you seeing America.

I was there living the cliché – a weekend break from the city – so a calming view of the sea was what I was after, and we were seated right by the windows. The perfect seat for anyone except vertigo sufferers. 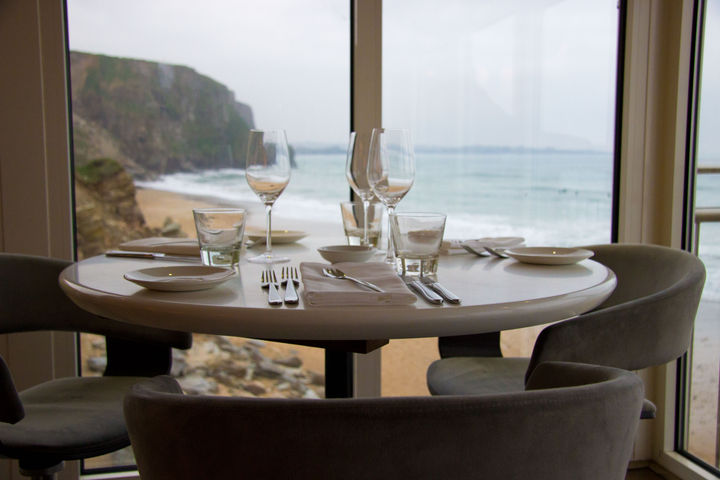 Opened back in May 2006, Fifteen Cornwall was built in the top floor of a beach hut with one aim in mind – to give the new generation of young people without jobs or qualifications the hope of a meaningful career. Since then it has trained over 100 new chefs and served nearly 500,000 diners. But why am I writing about my meal there? Well, firstly it was truly exceptional, but secondly because you could win a weekend away and a decadent meal there.

Deciding to go all out we went for the five-course taster menu with matched wines. What followed was a masterclass in classic Italian cooking that took my breath away (no exaggeration, just wait). Never before has Jamie’s philosophy of simple dishes and bold flavours hit home so hard. The fact that it partly cooked by disengaged young people who had been given a second chance in life by the Fifteen Apprentice Scheme only added to joy I took in eating every last mouthful.

We started with new-season asparagus – so much sweeter and crunchy than at any other time of year. Mine was topped with olive oil and an unhealthy but delicious amount of Parmigiano Reggiano, while my partner’s, who is dairy intolerant, was topped with a perfectly round pheasant’s egg. We finished them in a matter of mouthfuls, only just remembering to appreciate it with the fresh, apple-y Ruggeri Prosecco Giustino B Prosecco. 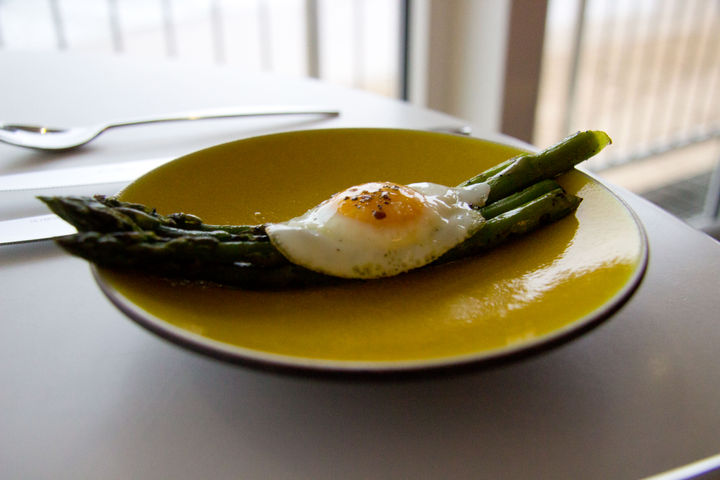 Next came a retro 80s classic – prosciutto and melon. For better or worse they weren’t presented on the end of cocktail sticks, instead wrapped around each other in an impressive circular maze and topped with mint to give it some bite. 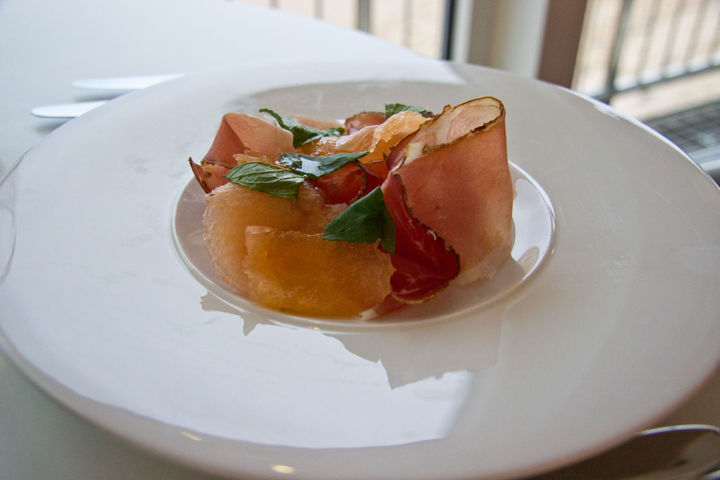 The primi course in Italian is what primes you for the main. Traditionally it’s a pasta or risotto, often using seafood. This was a chance for the patriotic Cornwellians to show, that when it comes to fresh fish, they can rival Italy – and they can rival them in making a risotto too. My Cornish crab risotto topped with rocket was light, zingy and fresh, with that underlying buttery creaminess that hit all the buttons and had me reaching for my few Italian superlatives. 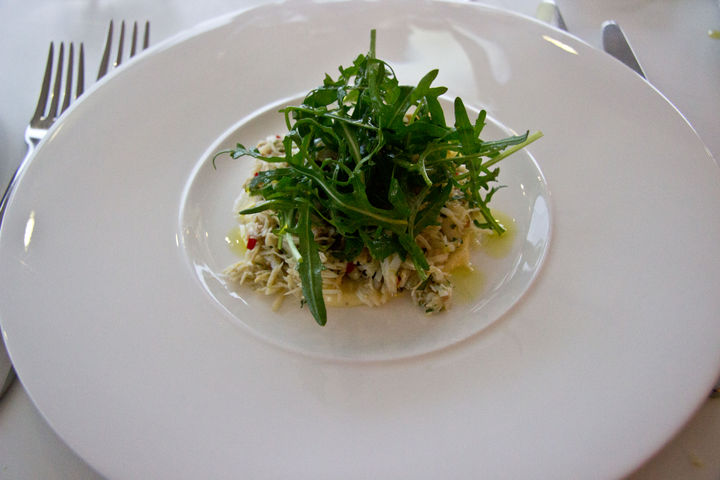 But then came the stand-out dish. Perhaps the best pasta I have ever had, or rather gnocchi. Just the words on the page made me happy: beef short-rib ragù. Three words that immediately conjure up the idea of a sticky, sweet, umami-loaded sauce. And it didn’t disappoint. Call me biased, I’ve certainly been called worse, but it was without doubt the most delicious ragù (or Bolognese) I have ever tasted.

And on we went to dessert – the trickiest course for someone with a lactose intolerance. But not at Fifteen, who not only had a remarkable range of sorbets but managed to make them look like art on the plate. Even if she did then ungraciously attack it with a teaspoon.

Mind you, that was nothing compared to the zeal with which I laid in to my rich chocolate torte, lightened and freshened by the raspberry sorbet. 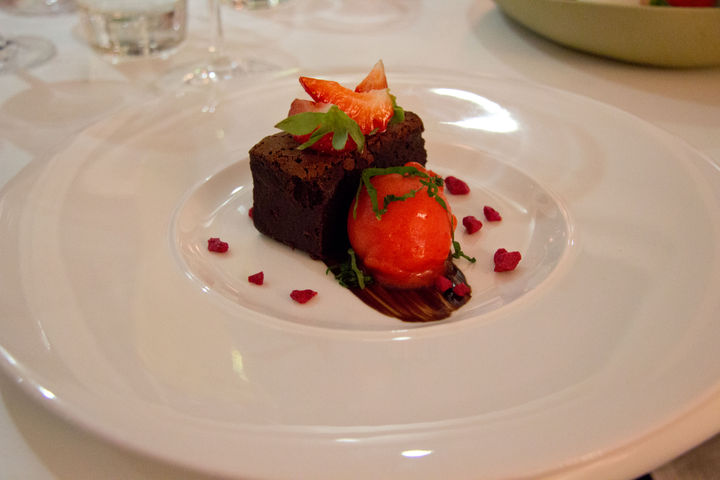 Wine number five, served to match our desserts, was another show-stopper – a sweet sauternes from Chateau Laville that had lots of subtle spices but honey notes by the hive-load, and a fresh fruity finish that cut through the dark chocolate as much as the sorbet did.

And so we stumbled back to our room at the wonderful Watergate Bay Hotel, full of good food and delirious from the intoxicating views and remarkable wine (did I get that the wrong way round?). There is no place quite like Watergate Bay, even without Fifteen. It is a amazing how calming the ocean can be, seen from a break in the cliffs. Every time I visit, going back to the city gets that little bit harder.

If you fancy a romantic weekend away and want to try this amazing menu, enter our summer competition with Fifteen for a five-course meal and three-night stay at Watergate Bay’s Village! And, in the meantime, some of the wines we tried are also available in the restaurant shop. 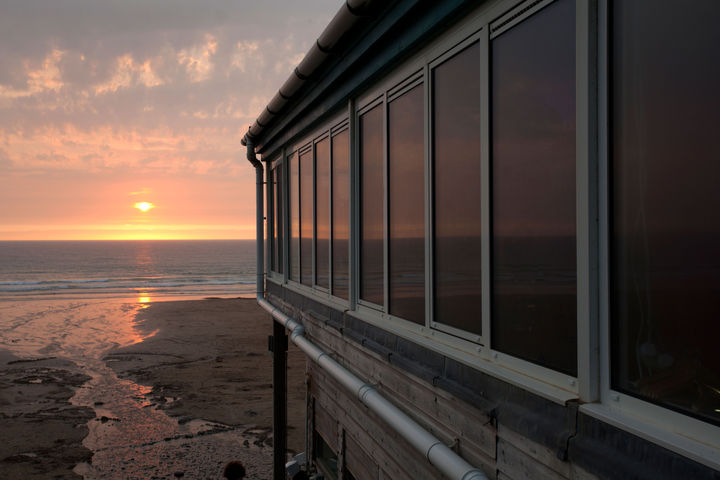